Inspiring a Generation of Bird Protectors 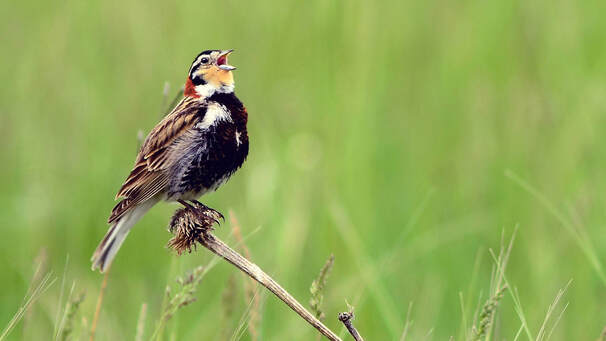 In the Great Plains alone, 97% of tallgrass prairie, 71% of mixed grass prairie, and 48% of shortgrass prairie had been lost by 2003. There are 42 species of North American birds that breed solely on these vanishing grasslands.

So how do we protect not only the Canadian prairies, but also the at-risk birds who live there? One of the ways we can is through education. If people, especially youth, are aware of at-risk biomes and species, they can help by monitoring populations and making choices to protect the grassland prairies.

This January, Sioux Valley Dakota Nation students in grades 7-10 learned how to be Zitkada Awanyankapi or Bird Protectors! They learned about bird species at risk, how to identify local bird species and the significance of the grassland ecosystems. The workshop was integrated with Traditional Dakota Knowledge about birds, presented by CIER staff and Sioux Valley Dakota Nation’ member, Cheyenne Ironman. This workshop was part of the Dakota Field Guide and Storybook project. The purpose of this project is to increase awareness of local birds and species at risk.

Cheyenne Ironman is working to share Traditional Dakota Knowledge through workshops like the one in January and through the development of a Field Guide, which combines western information on local birds with Dakota language and culture. “By documenting and sharing Dakota bird knowledge we can decolonize how we interact and view the world around us,” said Ironman. She also said it helps demonstrate cultural resiliency by revitalizing knowledge that was also at risk of being lost. “This is knowledge that isn’t used in an everyday context, so it was a good refresher for a lot of the elders we interviewed,” she said, “They were like ‘oh yeah!’ and as we were going along, they would remember things again. It’s really good to document that.”

“Imagine seeing and hearing the world the same way our kunshis (grandmothers) and unkans (grandfathers) did, knowing our traditional stories about birds and knowing the names of them in our own language”

At the January workshop, students learned about important prairie birding areas and local bird identification from Amanda Shave of Nature Manitoba, one of CIER’s partners on this project. Danielle McKinnon from the Brandon Riverbank Discovery Centre (where the workshop was held,) brought taxidermy birds and binoculars. Images of birds were posted around the gym so students could participate in an indoor “bird watching” session.

The students also had time to play and experiment with bird calls, they were quizzed and won prizes. Thanks to our funder Environment and Climate Change Canada, we had great prizes such as water bottles and bird feeders.
We would like to thank our partners on this project, the Sioux Valley Dakota Nation and Nature Manitoba.